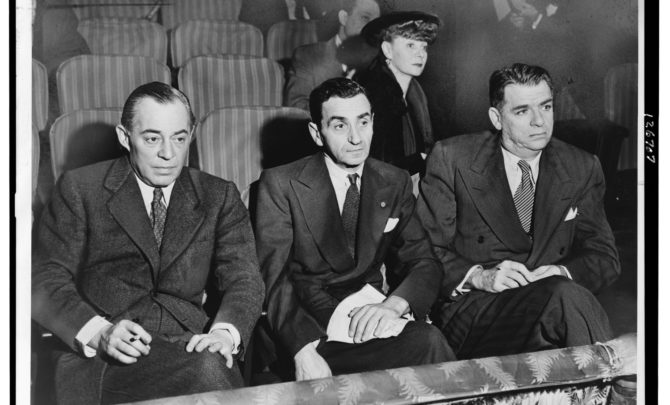 Library of Congress Richard Rodgers, Irving Berlin and Oscar Hammerstein II are watching hopefuls who are being auditioned on stage of the St. James Theatre.
https://americanprofile.com/wp-content/uploads/2013/03/richard-rodgers-150x150.jpg

America’s musical heritage includes composers who wrote some of the nation’s most enduring songs. Here’s a look at 10 of the best.

Known for unusual chord progressions and changing meters, Bacharach compositions have been sung by The Beatles (“Baby, It’s You”), B.J. Thomas (“Raindrops Keep Falling on My Head”) and The Carpenters (“Close to You”). Born in Kansas City, Mo., Bacharach, 84, with lyricist Hal David, wrote dozens of hits for Dionne Warwick during the 1960s and ’70s, including “Walk on By,” “I Say A Little Prayer” and “I’ll Never Fall in Love Again.”

“He has this incredible knack for capturing phrases of the English language musically,” says Chris Sampson, songwriting professor and associate dean at the University of Southern California’s Thornton School of Music, which bestowed Bacharach its Legacy Award in 2006.

During his nearly 60-year career, Berlin wrote about 1,500 songs, 18 movie scores and 19 Broadway shows. “Puttin’ On The Ritz,” “God Bless America” and “White Christmas” are among his most popular and enduring tunes.

Composer George Gershwin pronounced Berlin “the greatest songwriter that has ever lived.”

Creator of the World War I march “Over There,” Cohan began performing in his family’s vaudeville act as a child. He went on to compose 50 Broadway musicals and more than 500 songs, including “Give My Regards To Broadway,” “The Yankee Doodle Boy” and “You’re a Grand Old Flag.”

Born in Washington, D.C., Edward “Duke” Ellington began taking piano lessons at age 7. By 18, he and his band were playing for high-society functions in and around the nation’s capital.

When Ellington moved to Harlem in his 20s, he began attracting crowds at the Cotton Club, a celebrated jazz nightclub, and fame followed. He composed most of his band’s music, writing thousands of songs including “It Don’t Mean a Thing If It Ain’t Got That Swing” and “Mood Indigo” and film scores for Anatomy of a Murder (1959) and Paris Blues (1961).

“Some would be surprised to know at the end of his life he wrote sacred music and tried to incorporate the worship experience with jazz,” Harrison says. “I think he was doing it as an end-of-life statement. He got lukewarm reviews but said it was the most important thing he’d ever done.”

The Father of American Music was born in Pennsylvania and wrote more than 200 songs, including two state songs (Kentucky’s “My Old Kentucky Home” and Florida’s “Old Folks At Home”) and popular tunes such as “Oh! Susanna,” “Beautiful Dreamer” and “Camptown Races.”

Foster earned little money with his songs because copyright laws of the era provided limited protection. When he died in New York City at age 37, he was sick and impoverished. His worn leather wallet contained 38 cents in Civil War script, three pennies and a penciled scrap of paper that read, “Dear friends and gentle hearts.”

The Brooklyn, N.Y.-born son of Russian immigrants, Gershwin left school at 15 to work as a “song plugger” (a pianist who demonstrated songs) and was 20 when singer Al Jolson made his song “Swanee” a hit.

Gershwin’s “Rhapsody in Blue” (1924), a symphonic jazz composition, has been featured in numerous films. Among his collaborations with elder brother and lyricist Ira are Funny Face (1927) and Porgy and Bess (1935), a primarily black opera that initially failed commercially. Gershwin maintained it would be regarded as his greatest work, and today it’s among the 20th century’s top operas.

A childhood tutor introduced Joplin to classical music. By the 1880s, Joplin was an itinerant musician. With limited opportunities for black pianists, he played red-light districts for years. His “Maple Leaf Rag” was the musical genre’s first big hit in 1899, and his 1902 “The Entertainer” is another ragtime classic.

Witty lyrics, catchy melodies, double entendres and clever rhymes characterized his work.  “Don’t Fence Me In,” written for an unproduced 1934 movie, became a hit when Roy Rogers sang it in the 1944 film Hollywood Canteen.

Rodgers was the first music composer to win top awards for television, recording, movies and Broadway (Emmy, Grammy, Oscar and Tony), along with a Pulitzer Prize.

Born in New York City, Rodgers began playing piano at 6 and met lyricist Lorenz Hart at 17. Their collaboration produced hit songs and show tunes such as “Blue Moon,” “My Funny Valentine” and “The Lady Is a Tramp.” After Hart’s death, Rodgers worked with lyricist Oscar Hammerstein II, composing scores for Oklahoma! (1943), South Pacific (1949), The King and I (1951) and The Sound
of Music (1959).

Known as the March King, Sousa composed 136 military-style marches, 15 operettas and 70 songs, including “The Stars and Stripes Forever” (1896), designated the U.S. national march in 1987, and “Semper Fidelis” (1888), later enshrined as the U.S. Marine Corps’ official march.

The Washington, D.C.-born Sousa began his music education at age 6, and was enlisted at 13 as an apprentice by his U.S. Marine Band trombonist father. Sousa later headed the Marine Band for 12 years before forming his own band.

“Sousa’s programs were like a musical potpourri,” Harrison says. “He built on a classical tradition with Americana mixed into it.”

Who is Alice Englert’s Famous Mother?