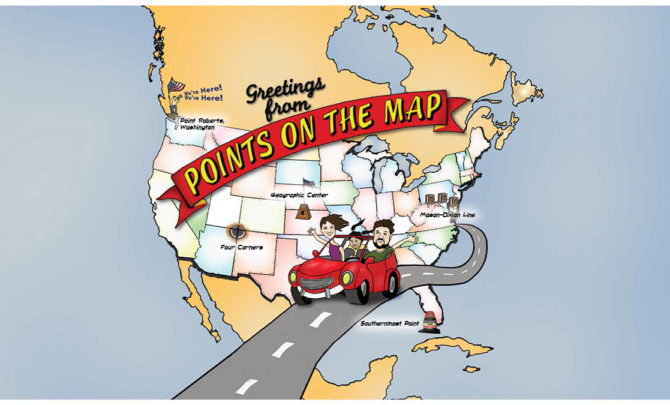 Geographic center of the contiguous United States
Jonas Bowles, 10, hops from a school bus and sprints toward a trapezoidal stone structure two miles northwest of Lebanon, Kan. (pop. 218). Climbing on the monument is forbidden, but imagination vaults him to the top.

“I’m the center of the USA!” Jonas declares during a field trip last spring from Lakeside Middle School in nearby Cawker City.

The geographic center of the contiguous 48 states—marked by the simple 10-foot podium—encourages visitors to think about just where on Earth they are.

“Not everybody gets to live [near] the center of the United States,” says Leonie Harzman, 10, adding that it’s easier to travel in any direction from this point.

In 1918, a survey established the significance of the site and, in 1941, civic leaders in nearby Lebanon donated money and labor to build a monument on the small plot of land. Folks began visiting from near and far.

“They’re from everywhere,” says Lori LaDow, 56, who operates a downtown Lebanon market where travelers often stop to eat and buy souvenirs. “We had a Japanese game show out there once, an X-Men movie crew. I don’t know how they find us. We’re on the map!”

Following a court order, the Penn family of Pennsylvania and the Calvert family of Maryland hired acclaimed English surveyors Charles Mason and Jeremiah Dixon to mark the border of their disputed lands, and placement of stone markers began in 1763. Some 250 years later, their handi-work remains along borders separating Delaware, Maryland, Pennsylvania and West Virginia.

“I was surprised by the fact it’s a tangible line,” says Babcock, who marvels at both the accuracy of the line, which was charted based on the stars, and the sheer physical accomplishment of marking it.

Toting heavy stones quarried and carved in England, Mason, Dixon and crew forged through the wilderness, setting a marker every mile and placing crown stones bearing the coats of arms of the Penn and Calvert families every fifth mile. “Toward the end, they had 115 men employed; it was like a small army,” Babcock says.

The east-west portion parallels latitude calculated from 15 miles south of Colonial Philadelphia. Using modern tools, volunteers have located 190 of the 230 markers along the Maryland-Pennsylvania border, repairing many and replacing a few. Many stones are on private land; others are open to public view.

A bronze disk embedded in granite marks the landmark near Teec Nos Pos, Ariz. (pop. 730), and is surrounded by seals and flags that honor the states and tribal nations that share the geographical point. The site is managed by the Navajo Nation, which charges admission of $3 per person.

Snapshots of some of the 250,000 visitors who travel annually to the remote marker show a flair for creativity. A boy does pushups—one hand in Colorado, the other in Utah, one foot in Arizona, the other in New Mexico. A girl performs a backbend the same way. A couple kisses across state borders.

Many states share tri-points, but Four Corners is America’s only quadripoint.

“Boundary lines follow human activity,” explains James Fraser Hart, 89, professor of geography at the University of Minnesota in Minneapolis. “If they are drawn where people already have settled, lines follow the way people use the land.”

Otherwise, boundaries typically are drawn straight, such as at Four Corners, where the land was largely unsettled in 1848 when Mexico ceded the vast Southwest territory to the United States. In 1863, Congress approved a map with straight lines running east to west and north to south, creating a quadripoint to be shared by four eventual states.

Southernmost Point
A painted concrete buoy, erected in 1983 at the corner of South and Whitehead streets in Key West, Fla. (pop. 24,649), marks the southernmost point of the continental United States. This landmark draws a million visitors a year—almost all with cameras.

“We could really make a lot of money for the city if we had a dollar for every photo,” quips Mayor Craig Cates, 60.

Cartographers list Ballast Key, a privately owned island in the Florida Keys, as the official southernmost point, but Key West claims public honors and offers a stunning ocean view just 90 miles from Cuba. The buoy sits where a Western Union cable once connected the nation to Cuba; a nearby plaque commemorates Cubans who have drowned trying to reach U.S. shores.

The unincorporated community, known locally as “the point,” rests on five square miles of U.S. soil because it lies south of the 49th parallel, which constitutes the Canada-U.S. border in that area. However, the peninsula, which lies about 20 miles south of Vancouver, Canada, has its own U.S. post office and zip code and is not physically connected to the rest of the nation.

The Oregon Treaty of 1846, which ended a longstanding border dispute, created this quirk on the map. “They simply drew the line and got an unexpected little peninsula,” Hart says.

Living in Point Roberts can be challenging. Public school students in grades 4-12 are transported daily by bus into Canada, around Boundary Bay and back into the United States to attend classes in Blaine, Wash. (pop. 4,684). Navigating international checkpoints also can prove frustrating for residents who need to get somewhere fast.

At the same time, border guards make Point Roberts one of the safest places in the world. “It’s like a gated community,” says Kris Lomedico, 65, who grew up in Point Roberts and manages the Whatcom County Library.