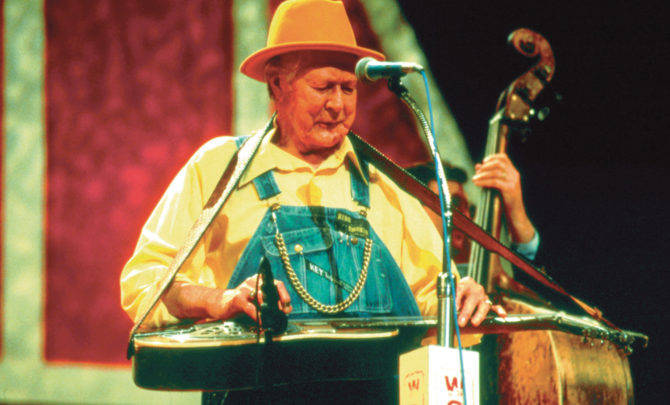 I am sending in a request about one of our favorites from the Grand Ole Opry, Pete Kirby, known as Bashful Brother Oswald. He was unbeatable playing dobro.

Bashful Brother Oswald, a beloved member of the Opry, died in 2002 at the age of 91. A native of Sevierville, Tenn. (pop. 11,757), he grew up in a music-loving family and learned to play banjo and guitar early in life. In 1929, he headed to Michigan for a job with Buick, only to see it disappear when the Great Depression hit. He started playing the banjo for a radio station there, and met a dobro player who played Hawaiian music. Kirby was fascinated by the instrument, and soon added it to his repertoire. He eventually returned to Tennessee, where Roy Acuff hired him to play dobro in his band. When he paired Kirby with banjo player Rachel Veach to do a bit of comedy for the show, Acuff realized that a single woman might not be acceptable to his audience, so he introduced the duo as a family act, “Rachel and her big bashful brother Oswald.” He continued to appear on the Opry, even after Roy Acuff died, and finally became a member in 1995.