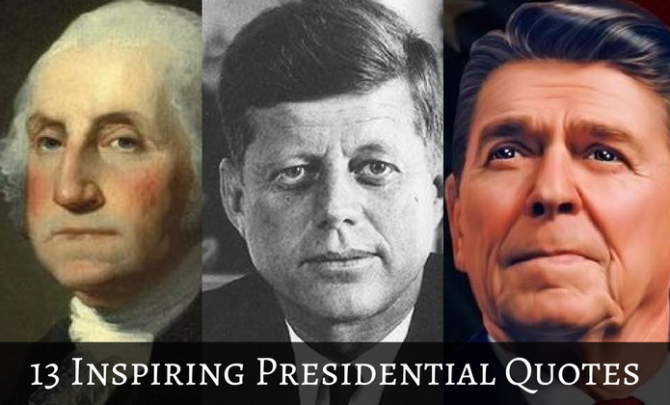 Our country’s great leaders had a great deal of wisdom to share—and not just on matters of politics. This election season, get inspired by 13 of our favorite quotes from U.S. Presidents, and check out our Politics Portal for the most socially shared articles on the race to the White House and more. “We didn’t pass it to our children in the bloodstream. It must be fought for, protected, and handed on for them to do the same, or one day we will spend our sunset years telling our children and our children’s children what it was once like in the United States where men were free.” “…for ’tis better to be alone than in bad company.” “Talent will not: nothing is more common than unsuccessful men with talent. Genius will not: unrewarded genius is almost a proverb. Education will not: the world is full of educated derelicts. Persistence and determination alone are omnipotent.” “Civilization owes most to the men and Women, known and unknown, whose free, inquiring minds and restless intellects could not be subdued by the power of tyranny. This is no time for any man to withdraw into some ivory tower and proclaim the right to hold himself aloof from the problems and the agonies of his society.” “These basic precepts are not lofty abstractions, far removed from matters of daily living. They are laws of spiritual strength that generate and define our material strength.” “…But however close we sometimes seem to that dark and final abyss, let no man of peace and freedom despair. For he does not stand alone.” And, perhaps the most important thought to carry into election season… Want more? Follow us on Pinterest and take a journey through the last two centuries in politics with 200 years of presidential campaign posters!

How to Keep Your Pets Safe This Halloween