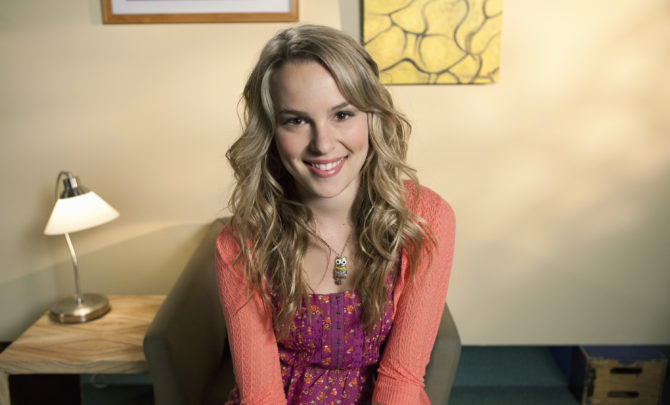 https://americanprofile.com/wp-content/uploads/2012/03/bridgetmendler_disneychanne_brucebirmelin-150x150.jpg
Does Bridgit Mendler have an album coming out?
—Toby Dionne, Cincinnati, Ohio
Yes. Mendler, who stars as Teddy Duncan on Good Luck Charlie, is currently working on an album, in addition to filming the third season of the Disney Channel series. She is hoping to see the album released this summer.
“There is a pop base to it, but, I think, it is going to be a little funky and soulful, too,” she says. She adds that she wrote on all the songs on the upcoming album, but “they were definitely in collaboration with other people in terms of how the songs were going to go.”
One tune she penned, “Summertime,” is featured in the movie The Secret World of Arrietty, based on the award-winning novel The Borrowers. “I had written the song before recording the movie and they ended up using that for the purpose of the movie,” says the Mill Valley, Calif.-raised actress, 19, who is also the voice of Arrietty in the animated film. “I think it is a nice fit. I don’t think it is going to be on my album. I see it as a different project. I like to keep my music and my acting roles separate. It has overlapped in a few roles, but I don’t see it being my music. I see it being my character’s music.”
Found in: Celebrity Q&A