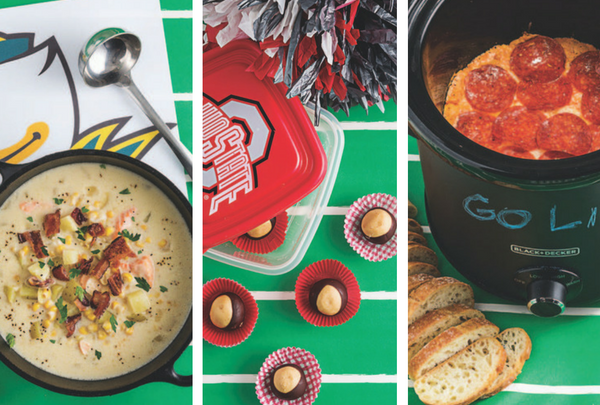 College football competition starts long before kickoff, when fans gather for tailgating festivities in parking lots, quads and backyards across America. Tradition rules, from colorful team garb to grub that celebrates regional food favorites. Here’s how fans at four top tailgating schools celebrate, along with recipes to try at your own football-watching parties.

Crimson Tide fans at the University of Alabama in Tuscaloosa are among the nation’s most passionate. Decked out in crimson and white, accented with black-and-white houndstooth (the team’s unofficial “third color”—an homage to legendary Coach Bear Bryant’s signature fedora), they pass the pregame time watching big-screen TVs under tents while chowing down and playing lawn games like cornhole.

Fare around Bryant-Denny Stadium runs traditionally Southern, particularly slow-smoked pork ribs. This rub from Alabama-based chain Jim ’N Nick’s works on pork or chicken, and takes well to jazzing up with your own favorite spices.

The Ohio State University Buckeyes fans really are nuts. It’s not just that their name and their mascot Brutus celebrate the nut of the state buckeye tree. Fans tailgate for miles outside Ohio Stadium (“The Horseshoe”), where a sea of scarlet and gray is accented with necklaces made from the large, smooth brown tree nuts—the OSU version of Mardi Gras beads. No surprise that nearly every tailgate spread includes this candy version of buckeyes, believed to have been created in the late 1960s by Gordon Candies of Columbus, Ohio. Our version offers a small update in the form of bittersweet chocolate instead of semisweet, but you can use either. The Northeast: Welcome to Nittanyville

Home games at Penn State have been dubbed “The Greatest Show in College Sports” by Sports Illustrated, in part because of the spreads put out by Nittany Lions fans. The population of State College, Pa., more than doubles on game day (Beaver Stadium is one of the largest in the world, seating more than 106,000 fans). Fans in the tent city outside the stadium, christened “Nittanyville,” keep things hearty and traditional with barbecue, chicken wings and food with lots of Italian flavors, like the gooey decadence of this Pizza Dip. Ducks fans at the University of Oregon’s Autzen Stadium in Eugene trick themselves out in lavish green-and-yellow regalia—everything from wild face and body painting to crazy wigs and dyed beards. Most food tables feature the region’s famous wild salmon, as in this version of salmon chowder—you can also use cod. 10 Comforting Breakfasts for the Coziest Morning Yet