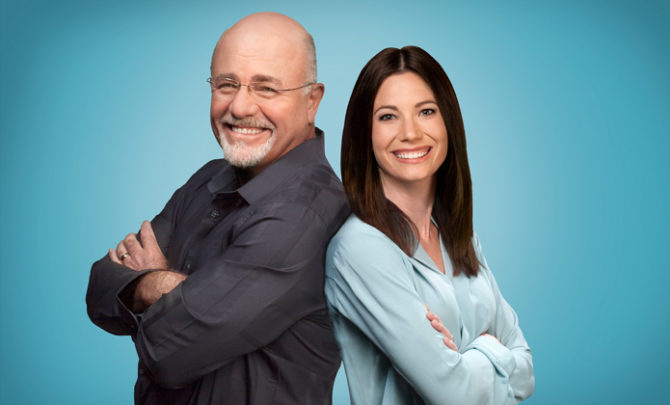 Dave Ramsey knew he was in for quite a ride with his youngest daughter.

The financial guru remembers a time when Rachel was about 4 years old and he had given her some kind of instruction she clearly didn’t want to hear. She faced him, hands defiantly on her little hips, and he felt her eyes burning a hole right through him.

He smiles about it now as he thinks about how Rachel’s independent spirit helped her grow into a magnetic, vibrant leader in his company, and an ally in his work to educate people about money.

Today, the father and daughter are teammates sharing their know-how from both sides of the family fence in their new book “Smart Money, Smart Kids.”

“Rachel’s got a lot of personality,” Ramsey says. “She’s not a shrinking violet. She was that way as a kid, too. We had to teach her to behave, but also not break her spirit in the process. She and I have always been a lot alike.”

Born at a turning point

Rachel, now 25, was born to Dave and wife Sharon at one of the lowest points of her father’s life, but also at a turning point. He’d lost everything he’d built in real estate to a market downturn and had to declare bankruptcy.

That twist of fate led Ramsey to his calling, helping people understand money and managing their finances. Eventually, he rebuilt his company into a 400-employee media franchise in Franklin, Tennessee, that now incorporates a successful radio show, several best-selling books, and money-management events.

Rachel, who uses her married last name of Cruze, learned valuable lessons during those years of rebuilding. “I was born six months before they went bankrupt, literally at the bottom of everything,” she recalls. “I remember going to consignment sales to buy clothes, garage sales, camping vacations, and us kids wanting, but not being able, to go out to eat.”

Even so, growing up Ramsey wasn’t as strict as some might expect. “I think people envision these nightly summits in our house talking about mutual funds, and that we were like little money soldiers marching around the house,” Cruze says. “But it wasn’t this crazy, intense part of our family like some people expect.”

As youngsters, Cruze and her brother and sister weren’t given money, but had to earn it. As they grew, so did their financial responsibilities.

“At 15 in the Ramsey family, you get your own checking account,” she says. “We were in charge of budgeting it. In just three months, I had bounced checks, and dad made me go down to the bank—and apologize for ‘lying.’ And I haven’t bounced a check since.”

Ramsey used weekly drives to the shopping mall with Cruze and her friends as teaching opportunities, much to his daughter’s chagrin. “I’d volunteer to drive them because that way I could preach at ’em the whole way,” Ramsey recalls. “I’d tell them getting out, ‘While you’re in there, pick me up a box of happiness—you’re in there every weekend looking for it, I know it’s in there somewhere! Rachel would go ‘Oh, Dad.’ and they’d say, ‘Your dad’s so weird!’ So I got to preach my sermon and embarrass a teenager!”

At 15, Cruze began traveling to her father’s Total Money Makeover events and speaking publicly about her own experiences with finances. Today, she speaks to high school and college audiences about how they can better handle their money and plan their financial futures.

“As Rachel came into the business, this proud dad started hearing wonderful things being said about her and thought, ‘Maybe we need to talk about how that happens, from both the kid’s and the dad’s perspective,” he says.

The two agree on their favorite chapter in the book, “Contentment.” Keeping your child’s desires and expectations in check is key.

“A hard thing to teach is being content,” Cruze says. “That principle’s not being grasped by my generation, or our culture. You always want bigger and better. Facebook is like window shopping: Seeing peers’ houses, cars, the best of the best, and you’re expecting that as well.”

“And the more television they watch, the more they get the gimmes,” Ramsey adds. “Advertising creates discontentment. And it goes from Cabbage Patch Dolls to iPhones and cars in an eye blink. Children are going to do what you do. You can’t teach your kid to save if you don’t save, or give if you don’t give, and they have to see you doing it, and know why.”

“It’s about changing your family tree,” Cruze says. “If parents do this and kids see it, your family will forever be changed. Money is such a stress point for so many people. But a parent giving their child the gift of how to interact with money in life is such a blessing.”