Americana, Iconic Communities, On the Road, Traditions
https://americanprofile.com/articles/granite-monument-making-town/
By Stuart Englert on March 4, 2010 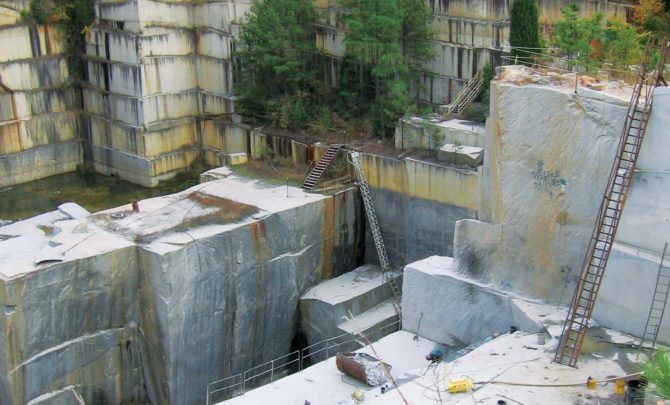 Stuart Englert The Granite Capital of the World is Elberton, Ga., home to dozens of stone quarries, including Beaver Dam Quarry.
https://americanprofile.com/wp-content/uploads/2010/03/dixie-granite-co-150x150.jpg

Operating the controls on a mining crane, Melvin Allen, 55, hoists a 10-ton block of granite from the Dixie Quarry and gently places the blue-gray stone on a semi-tractor trailer bound for a manufacturing plant a few miles away in Elberton, Ga. (pop. 4,743).

Within a month, Dixie Granite Co. workers will saw the block into slabs; polish, shape and inscribe the stones; and ship them to cemeteries, war memorials and historic sites across the nation, just as the company has done since 1928.

From quarrying the stone to sandblasting and engraving, we do it all, says John Campbell, 55, who bought the company with his wife, Kaye, 52, in 1997.

With dozens of granite quarries and 85 granite manufacturing plants, Elberton produces one-third of the nations memorials, monuments and mausoleums, and is the self-proclaimed Granite Capital of the World.

Perched atop a massive deposit of the hard, durable stone, Elbertonfounded in 1803 and named after Revolutionary War Gen. Samuel Elbertliterally was built on granite. Local stonecutters have quarried and sculpted granite since the 1880s, originally using the stone for building materials and railroad beds.

Its the hardest material known to man, other than diamonds, says Bill Kelly, 84, a granite industry historian and consultant.

Over the years, Elberton granite has been used to make millions of memorials, from simple cemetery markers to the National World War II Memorial in Washington, D.C. Elberton itself is adorned with hundreds of granite signs, statues and structures, including a Confederate soldier monument on the town square and the 20,000-seat Granite Bowl stadium, where the Elbert County High School Blue Devils play football each fall.

Elbertons most mysteriousand controversialgranite monument is the Georgia Guidestones. Dubbed Americas Stonehenge, the monument was anonymously commissioned, can be used to make astronomical observations and is inscribed with 10 futuristic guidelines for mankind on four 16-foot upright slabs. Among the instructionsetched in eight languagesare to maintain a human population under 500 million, to unite humanity with a new language, and to resolve disputes among nations in a world court.

In recent years, the monument has been spray-painted with graffiti and doused with polyurethane by vandals, some who perceive its message as satanic or socialistic.

Its a shame its been defaced, says Melissa Caruso, 48, the daughter of the late Joe Fendley, a former Elberton mayor whose company built and erected the monument north of town in 1980. It put Elberton on the map.

The story of the Georgia Guidestones and Elbert Countys granite industry is told at the Elberton Granite Museum and Exhibit, which chronicles the history of the industry; showcases antique stonecutting tools such as hammers, chisels and saws; and illustrates the granite manufacturing process through photographs and instructional displays.

In addition to Georgia granite, Elberton stonecutters and engravers sculpt and embellish stone in an array of colors and textures from Colorado white marble to South African black granite.

Were not just a gray granite community anymore, says Tom Robinson, 62, the outgoing executive vice president of the Elberton Granite Association. Our stonecutters work on almost every type of stone available.

Over the last 120 years, Elberton granite has been used to memorialize deceased loved ones, to honor fallen military heroes and to commemorate significant places in American history. Its a solid legacy thats likely to endurelike Elbertons blue-gray granite.

When you make a really nice monument that youre proud of, its very rewarding, says John Campbell, whose company produces thousands of monuments, memorials and markers each year.