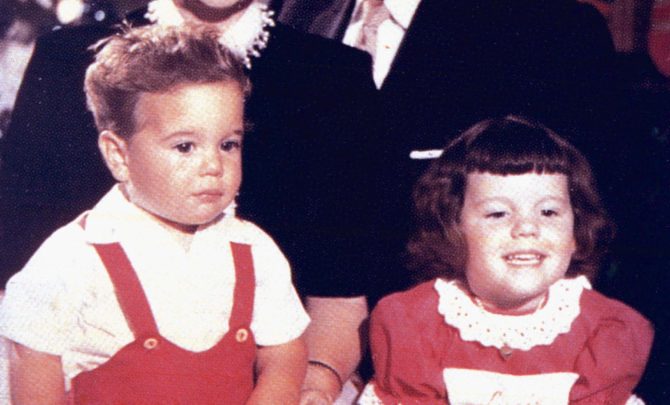 Courtesy of the Arnaz family Lucille Ball and Desi Arnaz in the 1953 family photo with their children, Desi Jr. and Lucie
https://americanprofile.com/wp-content/uploads/2011/02/lucy-desi-arnaz-family-photo-150x150.jpg

At home in Fairfield County, Conn., Lucie Arnaz, 59, is energetically promoting her new Latin Roots CD, scheduling performance and speaking engagements, and reaping accolades for Babalu, her onstage tribute to the music of her father, Desi Arnaz Sr.

More than 2,000 miles away in Boulder City, Nev. (pop. 14,966), Lucie's brother, Desi Jr., 58, busily oversees the downtown theater that he purchased in 1998 and painstakingly transformed into an elegant live performing arts venue. The Historic Boulder Theatre is the home of the nonprofit Boulder City Ballet Company founded by his wife, Amy.

As the grown children of television's most celebrated husband-and-wife comedy team, Lucie and Desi Jr. are divided by geography but are closer than ever, building successful lives in the ever-present shadow of their famous parents, Lucille Ball and Desi Sr.

Their late parents would be proud of them, says Wanda Clark, Ball's personal secretary for 27 years. "Every time I see Lucie or Desi Jr., I can almost see Lucy and their father in my mind, smiling," says Clark, 76, of Disney, Okla.


Ball and Arnaz captivated audiences as Ricky and Lucy Ricardo for 194 episodes of I Love Lucy and The Lucy-Desi Comedy Hour from 1951 to 1960, forever changing TV's landscape and still entertaining viewers throughout the world via syndicated reruns in dozens of languages. They built a TV empire at Desilu Productions, which employed more than 2,000 people at its peak and produced dozens of other popular shows.

Hollywood spotlight
Lucie and Desi Jr. learned early about living life in fame's spotlight as tour buses rumbled past their home in the same Beverly Hills, Calif., neighborhood where Jack Benny and Jimmy Stewart lived. Their personal playground was Desilu's studios in nearby Hollywood, where Desi Jr. climbed catwalks and Lucie shyly hid under the bleachers while audiences watched I Love Lucy being filmed live. The series began after their parents already had enjoyed successful music and film careers.

"Mom and Dad intentionally did I Love Lucy in order to have a life" that did not require extensive travel, Desi Jr. says. "They actually came home at night."

The show's success far exceeded their dreams, however, spawning Hollywood's largest studio at the time and producing hit series such as The Andy Griffith Show, Star Trek and Mission: Impossible. "One of the things I learned from Dad is that he took on too much," says Desi Jr., citing the pressures of running a sprawling business.

Shortly after filming their final episode in 1960, the Arnazes divorced. Ball went on to star in two more successful sitcoms, The Lucy Show (1962-68) and Here's Lucy (1968-74), casting her real-life children as her TV children in the latter.

"I was only 16 years old and barely an actress," Lucie recalls of her Here's Lucy work. "The only acting I had done was on (my mother's) show or in little tryout parts in high school. I just felt, she's my mother, she knows how to do this. The smartest thing I did was shut up and listen."

"Mom was great," Desi Jr. says. "She was practical in her approach to comedy and great in teaching us about timing."

Lucie starred in two television series during the 1980s; enjoyed film, stage and Broadway roles; performed in nightclub acts; and has worked behind the scenes as a director and producer. She and Desi Jr. oversee the company that licenses Lucy, Desi and I Love Lucy-related merchandise. Married for 30 years to actor Laurence Luckinbill, 76, Lucie is mom to Simon, 30, Joe, 28, and Katharine, 26, and stepmom to Nicholas, 41, and Ben, 35.

To fulfill a longtime dream to pay tribute to her father, Lucie last year debuted Babalu, a show celebrating Latin music through his story of coming to America after being exiled from Cuba. To create the concert, she immersed herself in a three-box cassette collection of her dad's earliest performances and combed through 300 of his orchestral arrangements. "I had never heard (these songs). I never got to hear The Desi Arnaz Orchestra live. I only knew it from those little bits and pieces he would do from time to time on I Love Lucy," she explains.

Lucie wrote, cast, directed and hosted Babalu, which included a 16-piece orchestra, singers, dancers and video clips, and recruited her brother as a percussionist. After five sold-out shows in New York, the production enjoyed another successful run in Miami, Fla.

Behind the scenes
The younger Desi considers the 1992 film The Mambo Kings as his own personal tribute to his father. Portraying Desi Sr., he vividly remembers his emotions while preparing for the role at his father's vacation home in Mexico. "I was trying to get the pitch of his voice right," says Desi Jr., noting that the house carries echoes. "I remembered his voice in that house and just lost it. All of a sudden, his voice started coming out of me."

Desi Jr. was a teen heartthrob in the 1960s band Dino, Desi & Billy before moving on to stage, film and television roles. He addressed much-publicized struggles with drugs and alcohol through a 12-step program and the self-help group New Life Foundation, where he met Amy at a class, married her in 1987, and adopted her 10-year-old daughter, Haley, from a previous marriage. Today, all three work together at the Historic Boulder Theatre.

"I wanted to have a different kind of life," he says of his choice to settle down in Boulder City. "I was interested in having a family and not being on the road."

While his '60s band reunited from 1999 to 2008 for performances and recordings, Desi Jr.'s heart never left Boulder City and the 380-seat theater where he produces plays, concerts and dance performances. "The projection room is like the ones we had at the (Desilu) studio. My life now is more like what it used to be as a kid because I work behind the scenes rather than as a performer," he says.

In addition to performing, Lucie has toured the lecture circuit since the early 1990s on the topic of "surviving success," drawing from her experiences as a wife, mother and actress, and as the child of two Hollywood icons. "My mother was a woman of achievement and it was fantastic for viewers, but it wasn't so fantastic for my brother and me, because she wasn't home a lot and I missed out on a lot (that) I wished she would have been there for," Lucie says.

Over the years, those feelings of loss have been replaced by appreciation, and she talks daily to photographs of her parents near her desk. "I say, 'Thank you' for what I thought was wonderful, and I thank them for what I thought wasn't wonderful," Lucie says, "My feelings for them have matured. The planet needs an enormous amount of love and laughter, and you can't get a better dose of it than by watching them in that show."