Hometown Heroes, On the Road, People, Travel Destinations
https://americanprofile.com/articles/one-mans-castle/
By John B. Kachuba on July 2, 2000 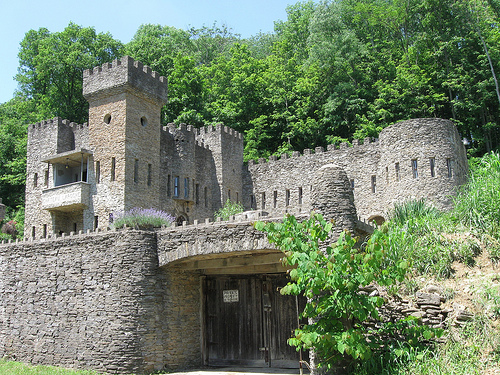 Part of the dream is known as Chateau Laroche (Rock Castle in French). It rises from a wooded hillside overlooking the scenic Little Miami River outside Loveland, Ohio–a one-fifth scale reproduction of a medieval Norman castle remarkable not only for being one of the few castles in the United States, but also for having been built almost entirely by one man.

It took a while. It took 52 years, in fact, after Harry D. Andrews began hauling the first river rocks up the hill in 1929, one bucket at a time. He was still working on the edifice when he died at age 91.

Andrews–a Cincinnati engineer, scholar, and Sunday school teacher–was inspired by castles he saw during his military service in France during World War I, and his studies at Toulouse University. But his beliefs in chivalry and the Ten Commandments also were keystones for his project. Today, both his castle and vision live on with a small group of men he inspired, known as the Knights of the Golden Trail.

The group helped Andrews finish the project, and it was willed to them upon his death in 1981. Today, the two-story castle measures 96 feet by 65 feet and is crowned by a 36-foot watchtower and two smaller towers. In addition to the dome room, in which Andrews lived, the castle contains a living room and kitchen, council chamber, dungeon, chapel, and balcony. Stables, terraced gardens, and an orchard surround the castle–now a popular attraction.

Sir Harry, as he was known by his followers, founded the Knights of the Golden Trail in 1927 to help save civilization. He believed the medieval code of chivalry was based on the Ten Commandments, and every Knight of the Golden Trail has promised to live the commandments as his vow to knighthood.

“I started when I was around 12 or 13 years old,” says Joe Carey, head knight at Chateau Laroche. “Sir Harry was known around here as someone to be looked up to, and my parents started bringing my brothers and sisters and me around when we were youngsters. You were always in good company with him.”

“He was a deeply religious man,” says Carey. “He thought that if we learned the Ten Commandments and could say them out loud, then that’s who he wanted to leave the castle to.”

Fewer than a dozen Knights of the Golden Trail remain today, but others are in training. These include pages (children under 13) and squires (teenagers) eagerly awaiting knighthood, some of them children and grandchildren of the original knights.

“It’s true knighthood, just the way it was; just as it’s been handed down,” Carey says. “It’s simple, but being a knight takes dedication and commitment.”

John Minderman, 25, was knighted in 1997. “The castle sparked a whole new interest in my life,” he says. “I think it’s a good thing; going back in time, being a kid again.”

As a former Boy Scout, Minderman often hosts his own troop at the castle. Chateau Laroche receives thousands of visitors each year, many of them Boy Scouts and Girl Scouts who stay overnight and earn a special castle scout badge. The Knights of the Golden Trail works closely with the scouts and other youth groups, and is trying to raise money to build a footbridge over the Little Miami River to connect with the Boy Scouts Silver Moccasin Trail.

In the meantime, it is said the spirit of Sir Harry still roams the halls of Chateau Laroche. If not, it certainly roams the minds of those who believe in his legacy and noble works.

Minderman’s own career path will be taking him from Ohio to Wisconsin later this year, and he already is talking about forming a chapter of the organization there, the group’s first branch, and building his own castle.

Found in: Hometown Heroes, On the Road, People, Travel Destinations

July 4: More than Fireworks and Hamburgers