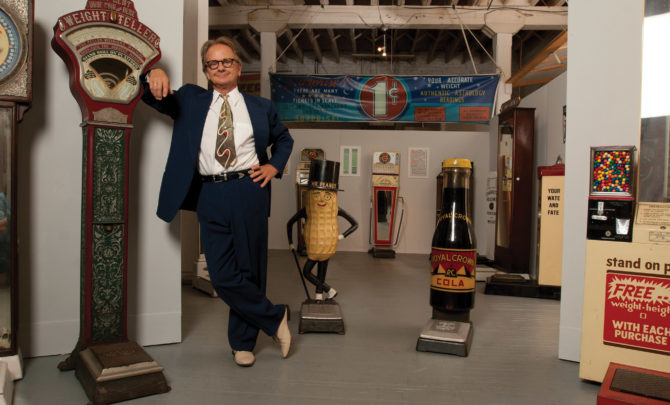 David Mudd Christopher Steele leans on one of his 200 antique scales, housed in his art studio in Columbus, Ohio.
https://americanprofile.com/wp-content/uploads/2010/12/christopher-steele-penny-scale-collector-150x150.jpg

When Christopher Steele, 62, wants to check his weight, he has more choices than an all-you-can-eat buffet, and it only costs a cent. The Columbus, Ohio, artist has amassed 200 coin-operated, cast-iron scales, and he treasures every one.

"I love the colors and the designs and the fact that they're 'green' machines," Steele says about his fanciful antique penny scales that were familiar fixtures in American arcades, banks, drugstores, movie theaters and train depots from the 1880s to the 1980s.

Steele vividly recalls the first penny scale he ever saw, a 1920s white porcelain beauty made by Peerless Weighing Machine Co. of Detroit, and standing nearly 6 feet tall near a ticket booth at Union Depot in Columbus in 1971. By the time an arrow on the scale's large dial pointed to his weight of 135 pounds, Steele knew he just had to own the flashy, ornate machine with its ceramic tile platform and brass coin slot.

"I said, 'I have to buy this,'" he says, recalling how he found the name of the vendor on the back of the machine, contacted him in Harrisburg, Pa., and three months later bought the scale for $65.

That purchase launched his 40-year quest to preserve penny scales and their place in American history. "It's consumed me and I've drained my bank account many times over to buy scales," says Steele, an architectural model builder who travels the nation saving obsolete penny scales from the scrap heap.

Housed in his art studio in Columbus, Steele's 15-ton, coin-operated collection ranges from an 1890 cast-iron machine to a 1992 computerized model. His rarest is a 1903 talking scale that finds the correct groove on a phonograph record and plays your weight. One of his favorites is a 1951 scale shaped like Mr. Peanut, whose nose paint is worn off from being rubbed for good luck when he stood outside a Planter's peanut store in downtown Columbus.

While Steele admires their beauty and design, he also appreciates the historical and cultural significance of the machines. "They were America's first vending machines that offered a service instead of a product," he says. "They evoke nostalgia for a simpler, healthier time."

During the scales' heyday in the 1930s, millions of Americans eagerly lined up and deposited more than 10 billion pennies a year in the machines so they could monitor their weight—and health.

"Penny scales were the first opportunity for people to get weighed without going to the doctor. Back then, people worried about not weighing enough," says Steele, explaining that diseases such as tuberculosis caused weight loss.

From the late 1880s when Watling Scale Co. of Chicago manufactured the first penny scale until bathroom scales became affordable in the 1950s, hundreds of scale manufacturing companies competed for weight watchers' pennies. Companies tried to outdo each other with imaginative designs and gimmicks. Some of the coin-operated machines have mirrors for checking lipstick smudges and nylon seams, and levers to push and dials to spin to dispense lucky numbers and horoscopes. Others refund the coin if the correct weight is guessed. Many scales built in the 1920s and 1930s resemble skyscrapers and mummy cases, in keeping with the era's fascination with tall buildings and King Tut's tomb.

"Hollywood loved the penny scales because it increased the take at the movie theaters," Steele says as he drops a penny into a 1930 art deco-style scale that also dispenses a ticket-size portrait of actress Elizabeth Taylor.

Through the years, Steele has provided penny scales for exhibits at the Smithsonian Institution in Washington, D.C., the Toledo (Ohio) Museum of Art, and the Taft Museum of Art in Cincinnati, and he's looking for a permanent home to showcase his machines. He's also building a prototype of a coin-operated scale that he designed to weigh children.

"I'd feel that I had contributed to society if my collection could help fight obesity," Steele says.