Americana, History, Made in America, On the Road, This Week in History, Traditions, Travel Destinations
https://americanprofile.com/articles/preserving-historic-gristmills-video/
By Marti Attoun on August 18, 2011 David Mudd The 1802 Clifton Mill in Clifton, Ohio, diverts water from the Little Miami River to power its turbine and grind grain.
https://americanprofile.com/wp-content/uploads/2011/08/clifton-mill-ohio-150x150.jpg

The splash of water pushing the paddles on the wooden water wheel at War Eagle Mill, near Rogers, Ark. (pop. 38,829), has been a welcome sound for more than 175 years, bringing with it the promise of buttered biscuits and fresh-from-the-oven cornbread.

“People have a connection to the mill,” says Doug Walsh, 34, manager of the water-powered gristmill, which has ground wheat and corn into flour and cornmeal along War Eagle Creek since 1832. “People love the experience of coming here—the wood floors and the mill with the creek in the background really creates a homey feeling.”

Homesteader Sylvanus Blackburn put down roots in the fertile War Eagle Valley in 1832 and built War Eagle Mill to serve neighboring farmers. Floods washed away his first mill in 1838, then Confederate soldiers torched his second mill during the Civil War so Union soldiers couldn’t use it. The family’s third mill accidentally burned in 1924, but 50 years later, the Jewel Medlin family rebuilt the mill on its original foundation.

As it has since pioneer days, water from the creek strikes the bottom of an 18-foot undershot water wheel that powers pulleys, belts and gears to turn the massive 30-inch-diameter French buhrstones, which grind the grain.

“The stones wear very little because they only touch the grain,” says miller Stephen Burgess, 52, while feeding yellow corn kernels into the hopper above the rumbling millstones.

“The oil is still in the corn, and the germ is still in the wheat,” Burgess says about the slow, stone-grinding process that preserves the grains’ nutrients and flavors.

Paula Henry, 44, of Bella Vista, Ark. (pop. 16,582), loves the taste and texture of the mill’s buckwheat flour, which she uses in a dozen varieties of crepes served from her traveling gourmet food trailer, Crepes Paulette. “It makes an amazing batter that has elasticity to it,” she says.

Several hundred people wind their way each week on country roads to load up on the freshly ground organic cornmeal and whole wheat, buckwheat and rye flours packed in colorful cotton bags—and to feast on biscuits, cobblers, cornbread and pancakes served at the mill’s Bean Palace Restaurant. Gathering places
More than 100,000 gristmills such as War Eagle Mill dotted America’s countryside during the 1850s, when farmers needed access to a mill within a day’s travel by horse-drawn wagon.

“Every few miles, if there was water, you’d find a mill,” says Harold Rapp, 75, president of the Society for the Preservation of Old Mills. “The mill became a social center, and many of the millers became wealthy people and bankers.” Farmers paid a “toll” in grain for grinding, and the miller, in turn, sold the grain.

“The mill was the gathering place because people came often on a weekly basis to grind their flour,” says Rapp, of Colts Neck, N.J. (pop. 12,331). “They’d wait in line and talk to their neighbors and farmer friends. Children accompanied parents and might have a swim or fish in the millpond.” Printers posted their newspapers on the side of the mill.

“We tell the schoolkids, ‘These bags represent places just like this that used to exist,’” says Satariano, 48, who considers himself a care-taker of Ohio history as he keeps the millstones grinding in the 1802 mill.

By the early 1900s, small stone-grinding mills couldn’t compete with larger, more efficient steel roller mills, and most ground to a halt.

Mills across America
Today, fewer than 1,000 gristmills—both in working and nonworking condition—can be found across the United States.

Some mills have been restored for other uses. The four-story 1836 Stone Mill showcases contemporary artwork at Hunterdon Art Museum in Clinton, N.J. (pop. 12,957), and Iowa’s oldest gristmill houses Potter’s Mill, a bed-and-breakfast and restaurant that is for sale in Bellevue (pop. 2,350).

“The rooms are built around the hand-hewn walnut and oak beams,” manager Michelle Roling says about the 1845 Iowa mill built along the Mississippi River. “On the first floor, grooves have been worn into the floor from the flour barrels.” A historic jewel among America’s operating gristmills is the nation’s first gristmill, Jenney Grist Mill, built in 1636 by John Jenney, one of the original pilgrims in Plymouth, Mass. (pop. 51,701).

“Free trade in the United States started right here,” says Leo Martin, 60, who dresses in Colonial-era breeches and a doublet while grinding corn in the mill reconstructed on the original mill’s footings along Town Brook river.

The pilgrims used cornmeal to make polenta and johnnycakes. “The corn has so many carbohydrates and gave them instant energy, so they could survive and make it through the day,” Martin says.

Ten years ago, Martin and his wife, Nancy, 58, were looking for property for a photography studio when they found Jenney Grist Mill. Struck by its historical significance, they leased and reopened the mill four months later for tours and demonstrations.

Preserving the past
Saving Colonial history also drives the volunteers who keep the millstones turning at Wye Grist Mill in Wye Mills, Md. Built in 1682, the state’s oldest operating gristmill shipped barrels of flour to the Continental Army during the American Revolution.

Rhonda Corder, 50, points out original hand-hewn beams as she leads tours alongside Buster, her Australian blue heeler. As with many gristmills destroyed by fire or natural disaster, Wye Grist Mill was rebuilt following Hurricane Connie in 1955.

On the first and third Saturdays of each month from April to November, volunteers grind barley, buckwheat, corn and wheat. Flour sales support the mill, which is owned by Friends of Wye Mills Inc. Volunteers provide the power at many gristmills, including the 1785 limestone Burwell-Morgan Mill in Millwood, Va. Members of the Clarke County Historical Association worked seven years restoring the mill, which did a bustling around-the-clock business in its early years.

“Shenandoah Valley was the breadbasket of the country in the 1780s, and that’s why the mill was built,” says manager Don Wallace, 59.

The mill’s water wheel was placed inside to permit year-round processing, whereas most gristmills operated only during harvest season. On Saturdays from May to November, volunteers grind corn, rye, wheat and a 9-grain blend of flour.

“Before Oliver Evans, it took a whole team of men to produce flour,” says William Robbins, 59, head miller. “You physically had to clean and move the grain upstairs by hand and move it from one end of the room to another and package it by hand. He automated all those processes so two men could run the mill.” 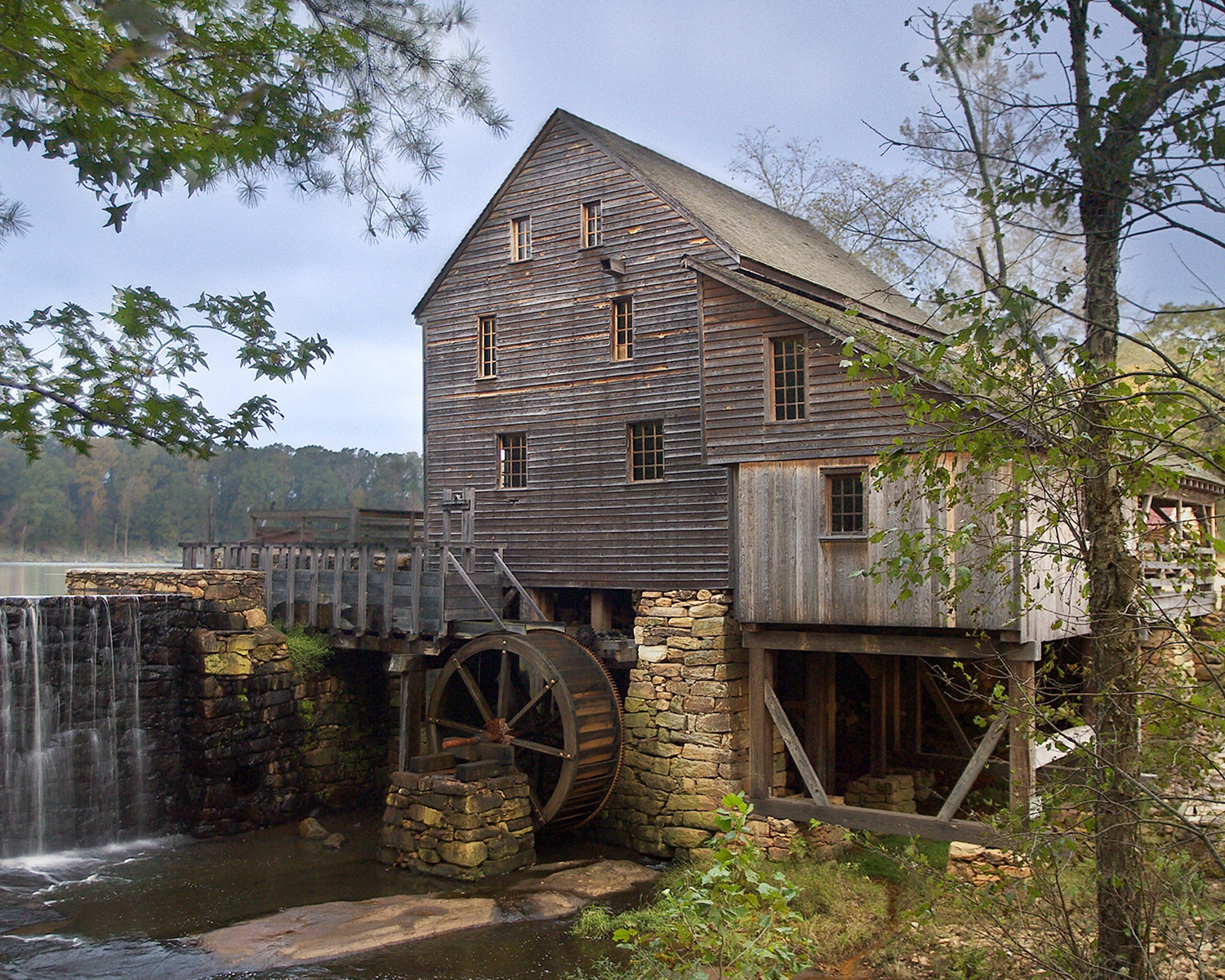 A taste of history
In Woodland, Wash. (pop. 3,780), Friends of the Cedar Creek Grist Mill restored the 1876 mill, which predates statehood by 13 years. The mill operates as a museum where volunteers demonstrate the stone milling of hard red spring wheat, winter wheat and common field corn.

“Most kids think flour comes from Kroger’s,” says Tom Henrich, 70, tour director. “We want to connect young people with their past.”

More than a taste for history is stirring a renewed interest in America’s remaining gristmills, says Bob Russell, owner of Butte Creek Mill, which has been in continuous operation since 1872 in Eagle Point, Ore. (pop. 4,797).

“The products themselves are terrific with flavor and texture,” says Russell, 59, who mills more than 50 products—from organic millet flour to ginger snap cookie mix—on the original 1,600-pound French buhrstones.

“We haven’t bleached the flour or taken the germ or the bran out. The cornmeal tastes like corn,” he says. “This really is the taste of 130 years ago.”

Found in: Americana, History, Made in America, On the Road, This Week in History, Traditions, Travel Destinations