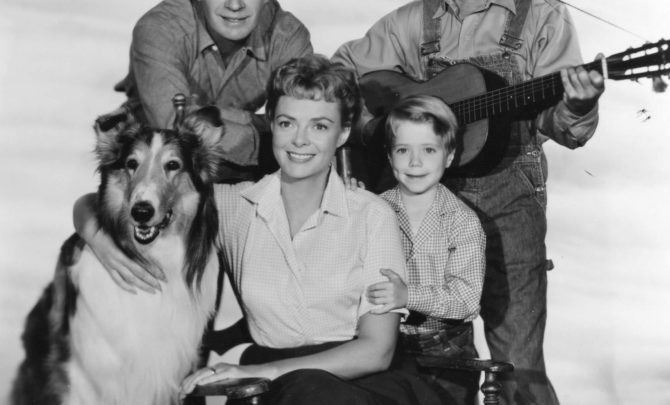 Like many little boys, Jon Provost grew up with a dog. But unlike most kids, little Jon's dog happened to be the most famous canine in the world.

Provost, now 58, was 7 when selected to play Timmy, the TV owner of Lassie. The blond, angelic-faced Provost replaced Tommy Rettig (Lassie's companion from 1954 to 1957) in a revamped storyline that ran to 1964.

Timmy became an iconic character. His checked shirt and jeans are in the Smithsonian Institution, and Provost was honored with a star on the Hollywood Walk of Fame in 1994.

Still boyishly handsome, Provost has fond memories of working with Lassie and the dog's owner/trainer, Rudd Weatherwax, who became a "surrogate grandfather" to the young star.

"I really loved Rudd," Provost says. "How he loved his dogs really made an impression on me. I worked with three different Lassiesthe son of Pal, the original Lassie; the grandson; and the great-grandson."

Jeannie Russell, a Hollywood chiropractor who played Margaret on TV's Dennis The Menace, has been friends with Provost since their early days as child stars.

"He was the cutest child on earth, with a terrific devil-may-care spirit, and yet he was a total professional," she remembers.

Before Provost could read, his mother would read lines to him, which he quickly memorized. One of his first roles, at just over 2 years old, was portraying Jane Wyman's son in the movie So Big. He went on to act with Bing Crosby and Grace Kelly before TV stardom came calling on Jeff's Collie, a Lassie spinoff.  (The show later was syndicated under the title Timmy and Lassie.)

Struggling to read hit TV scripts, he learned he was dyslexic.

"Back then, they didn't even know what that was," he says. "But if I heard it, I memorized it."

At 14, Provost voluntarily left the show, which aired until 1974. He continued working in television and films, including This Property Is Condemned with Natalie Wood and Robert Redford, before appearing in his final movie at age 18.

"I'd been working 15 years and it was time for a break," he says. "I wanted to be a normal college kid."

He married and fathered two children, Ryan, now 25, and Katie, 23, and worked in the real estate industry. Since 1983, he's been involved with Canine Companions, a nonprofit organization that provides assistance dogs for people with disabilities. In 1989, he returned to television on the syndicated The New Lassie for two seasons.

"It felt like coming home to your bedroom in your parents' house that you hadn't been in for 20 years," he recalls.

A 1993 divorce threw him into deep depression. Unlike his TV persona, there was no dog to save him, but friends, family and talking to other people helped. Three years later, he met writer Laurie Jacobsen at a celebrity autograph show, and they married in 1999.  His Jeff's Collie TV mom, June Lockhart, now 84, was first to respond to the wedding invitation. The Provosts co-authored Timmy's in the Well: The Jon Provost Story in 2007.

Provost, who lives in northern California, has appeared in several "classic TV" documentaries and recently did a voiceover for a pilot cartoon show. He makes personal appearances several times a month and is pleased when younger fans who watched Lassie reruns approach him. He recalls with a laugh a 20-something guy covered in tattoos and piercings, with his head shaved bald. "He said, 'Timmy, I grew up with youplease sign my head!'

"The majority of shows today, no one will remember in 10 years. But the classicsand I consider Lassie one of the classicswill be around forever."

Read more about Lassie and other famous canines in our list of 10 Popular Dog Names.