Festivals, On the Road, Traditions
https://americanprofile.com/articles/the-grange-fair/
By Marti Attoun on August 6, 2009 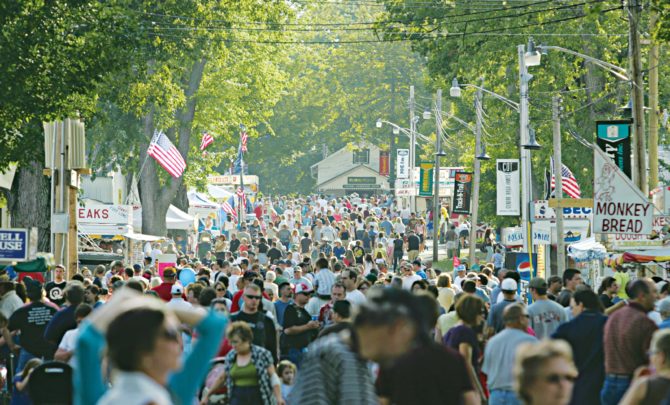 When George and Tina Traxler  and their five children visit the Centre County Grange Encampment and Fair in Centre Hall, Pa. (pop. 1,079), they bring along their 4-H projects and all the comforts of home: a full-size refrigerator, kitchen cabinets, microwave oven, table and chairs, bunk beds, television and carpeting.

The Traxlers, of Aaronsburg, Pa. (pop. 485), set up housekeeping for the week in a humble canvas tent amid a boomtown of 975 identical tents staked in rows along tree-lined lanes. Held annually since 1874, the encampment fair is one of the last in America and a tradition that longtime attendees cherish as much as a blue-ribbon cherry pie.

"My great-grandmother had a tent and she'd take us grandkids to the fair," recalls Tina, 40, while relaxing at a kitchen table in front of her tent. "We'd play cards and eat snow cones. It was a highlight of my summer."

When the Traxlers married in 1987, Tina put their names on the waiting list to rent a tent. They got lucky. They only had to wait 15 years. Their second year of tenting, Tina went into labor, dashed to Evangelical Community Hospital in Lewisburg, Pa. (pop. 5,620), gave birth and returned with baby Sarah.

"Sarah spent the night at the fair before she ever spent a night at home," Tina says.

Such loyalty is commonplace at the fair that Leonard Rhone first held as a "pic-nik" for farmers to rally support for the newly established National Grange of the Order of Patrons of Husbandry, more commonly called The Grange.

The Grange movement
After the Civil War, many of the nation's farms lay in shambles. Oliver Hudson Kelley, a Minnesota farmer who in 1864 accepted a job with the U.S. Department of Agriculture, later was commissioned to make a trip through the South to report on agricultural conditions.

Kelley concluded that farmers needed their own national fraternal organization to help them prosper, and on Dec. 4, 1867, he and six other men met in Washington, D.C., and founded the National Grange to serve the interests of farmerseconomically, socially and politically.

"The Grange was started because the railroads were charging more to the farmers to ship their crops than the farmers were getting," says national secretary Henrietta Keller of O'Fallon, Ill. (pop. 21,911).

Through the decades, the Grange has been a voice for farmers and played a role in creating Rural Free Delivery of mail, developing the interstate highway system, and bringing technology to rural areas. With 300,000 members in 37 states, local Grange chapters today serve communities with projects such as Words for Thirds, which distributes dictionaries to third-graders, while the National Grange, headquartered in the nation's capital, advocates for legislation on behalf of rural America.

Grange supporter Leonard Rhone chartered Centre County's first Grange chapter in February 1874, then organized its first gathering the following September. Some 3,000 people came by horse and wagon to Leech's Woods near Centre Hall. "Eight or 10 acres of the woodland were dotted with many hundreds of tablecloths and a feast was enjoyed by all," according to The Centre Reporter.

Grange members continued the popular picnics, which included bands, a parade and speeches by Grange officers about advances in agriculture. They began bringing tents so they could attend the daylong festivities, stay overnight and return safely home on mountain roads the next morning. In 1887, Rhone borrowed some Civil War tents from the Pennsylvania National Guard to accommodate more familiesand the tenting tradition began in earnest.

"It's the most coveted real estate in Centre County," says Darlene Confer, the fair's general manager, about the 14-by-14-foot tent sites. "They just pass the tents down generation to generation. I stopped taking requests when my list hit 500."

A fair deal
With tents and free admission to the fair, Rhone encouraged attendance because he knew farm families needed a break from the isolation of rural life.

"Rhone wanted the fair to be affordable for families and it still is," says fair secretary LeDon Young, 56, who lives in a tent at the fair. Tent rental for a week is $175, and most families bring appliances to cook their own meals. About 1,500 recreational-vehicle spaces rent for $155 to $175; and a one-day fair ticket costs $5. Children 11 and under attend free.

Livestock shows and exhibit halls grab the spotlight, though, as adults and young people in 4-H and FFA display handiwork, garden produce and farm animalsfrom crocheted sweaters to crookneck squash, and hens to Holsteins.

"I decided to put them in layers to make it as colorful as possible," Houtz says about the prize-winning jar filled with six tiers of vegetables. For 20 years, Houtz has entered fresh produce and canned fruits and vegetables for the fair, as did her mother and grandmother.

Along with veterans like Houtz are first-time exhibitors, such as Emma Spackman, 9, of Port Matilda, Pa. (pop. 638). Outside a livestock barn, Emma enthusiastically scrubs Vanilla Bean, one of the two lambs she has tended for nine months.

"He likes this because he doesn't have to do it himself," she says as she takes a hose and rinses sudsy dish detergent from the lamb's back. "I feed and water them. If it's hot I fill their water buckets several times."
A month before the fair, Emma wrote to a dozen friends and business owners to tell them about her 4-H project. "I just said how old I am and my name, and that I'm showing at the fair. And would you please consider coming to Grange Fair to buy my lamb?"

The letters and work paid off when Vanilla Bean placed second in his class and Rocky Road took first. The lambs fetched $2,650, which went into Emma's college fund.

A grand reunion
For many fair-goers, the best part is simply sitting and visiting. Tents are used as headquarters for reunions as relatives and friends flock back each August.

Benner sits at a table heaped with baked chicken and homemade cabbage rolls in the tent of lifelong friend Joanne Wert Blazer, 75. Blazer's tent has been in her family since the early 1900s.

In a nearby tent, Ruth Wolf and Lois Homan, both 93, laugh and catch up on family news. Wolf has camped on the same site every fair since she was born in 1916.

As a child, Wolf peddled milk bottles from tent to tent. As a young mother, she walked her children to the fair playground, and later cooked hearty breakfasts of French toast and bacon and fed everyone who came up the lane with a plate.

Found in: Festivals, On the Road, Traditions

Candy for the Ages