Odd Jobs, People
https://americanprofile.com/articles/topgun-school/
By Jeanne Lauf Walpole on May 28, 2007 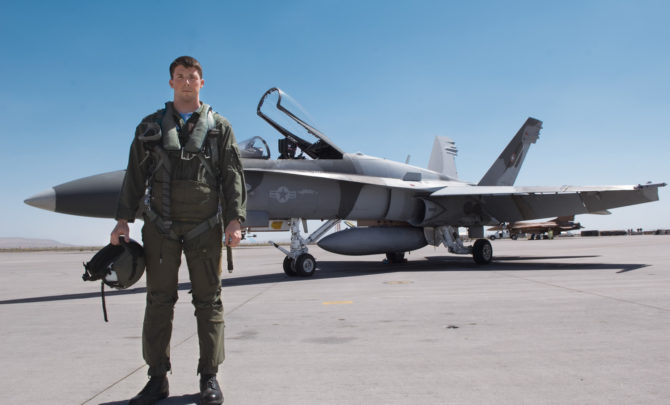 Lt. Guy Snodgrass, 30, streaks across the desert sky in an F/A-18 Hornet at supersonic speeds, performing a heart-stopping aerial maneuver that only an elite group of student pilots and very unfortunate enemy aircraft will ever see.

“When you get a chance to go fly, it’s a blast,” says Snodgrass, an instructor at Naval Fighter Weapons School, better known as TOPGUN school, in Fallon, Nev. (pop. 8,103). “The blood pressure goes up and it kind of gets you all fired up.”

Snodgrass, along with the school’s other 20 instructors, teaches a dozen handpicked students how to push themselves and their fighter aircrafts to the limit, learning combat maneuvers that may one day save their lives. “The skills we teach at TOPGUN directly impact the Naval and Marine Corps aviator’s ability to fight and win, whether it is in the air-to-ground or air-to-air environment,” Snodgrass says.

Because of its high admission standards, only about 1 percent of U.S. Navy and Marine Corps’ fighter pilots are eligible to apply as students at one of the school’s four annual training sessions. Students must have letters of recommendation and are chosen for their passion, expertise as pilots and ability to communicate.

In just one nine-week session, teachers and students spend more than 100 hours in the classroom and 25 hours in the air engaging in combat missions against other aircraft. The initial flights are one-on-one with Snodgrass, for example, simulating aerial combat against a student. As the course progresses, the engagements become more complex with increasing numbers of aircraft maneuvering against an unknown number of adversaries. “You have to concentrate solely on what you’re doing with your airplane,” he says.

Snodgrass, who grew up in Dallas, had always dreamed of being a military pilot, joining the U.S. Naval Academy in Annapolis, Md., following high school. As part of an exchange program, he spent one semester at the U.S. Air Force Academy in Colorado Springs, Colo., where, at age 20, he took to the air piloting, of all things, a glider.

In 1998, he graduated from the Naval Academy and later attended flight school at Mississippi’s Naval Air Station in Meridian. By 2004 he was putting his pilot skills to the test, flying 25 missions during Operation Iraqi Freedom. His hazardous low-level flights into hostile Iraqi territory often provided cover for ground troops. He recalls one incident in which “there were Marines under attack and surrounded. I fired approximately 500 rounds to disperse the attackers.”

In March 2006, he became a TOPGUN instructor, and now shares his experience with the military’s best young pilots.

“His passion for flying does rub off on students,” says fellow instructor Lt. Daniel delaCruz. “His drive, determination and ability is seen by students and instructors, and it pushes everyone to work harder and do things the right way.”

Snodgrass says all of the hours of training pay off and can keep a pilot’s fear at bay during real-life combat situations. “You’ve done it so many times in training, you never really feel overwhelmed,” he says.

While both TOPGUN instructors and students alike are selected for their superior flying skills, they also must have a desire to teach. “We expect our instructors to effectively teach the students who come through the class so that when they graduate, they in turn become the teachers to the fleet,” says Cmdr. Keith Taylor, the Naval Fighter Weapons School’s department head.

In addition to flying at supersonic speeds, Snodgrass says he gets a thrill meeting the next generation of pilots. “The coolest thing is when a kid wants to understand what you do,” he says. “It might encourage them to join the Navy.”

But his greatest sense of satisfaction is in knowing that he’s doing something important for his country. “To do this everyone has to be extremely patriotic,” he says. “We support people in harm’s way and defend our country’s interest.”