Who Invented the Banana Split?

Iconic Communities, Made in America, On the Road, Traditions
https://americanprofile.com/articles/two-towns-rivalry-over-who-invented-banana-split-video/
By Marti Attoun on June 4, 2009 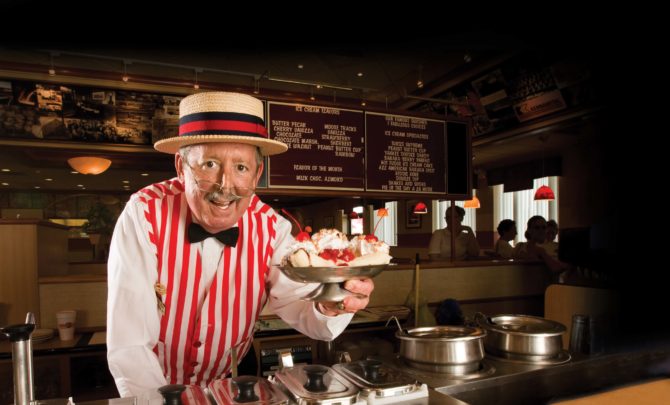 The debate between the two towns for bragging rights to the all-American banana split is at a sweet stalemate. “We’ve agreed to disagree,” says Debbie Stamper, executive director of the Clinton County (Ohio) Convention and Visitors Bureau. “It’s fun-an Ohio versus Pennsylvania rivalry.”

Latrobe is top banana
While neither town can produce a yellowed newspaper clipping heralding the birth of the banana split, the evidence strongly favors Latrobe, according to food historian Michael Turback, author of The Banana Split Book. The confusion is understandable, though.

“Soda fountains were very competitive” in the early 1900s, Turback says. “They were always trying to outdo each other, to see who had the most elaborate sundaes.”

David Strickler, a 23-year-old druggist apprentice at Tassell Pharmacy in Latrobe, apparently out-scooped them all in the summer of 1904. He split a banana from stem to stern, laid it on a dish and heaped three scoops of ice cream between the halves. He topped the ice cream with marshmallow, pineapple slices, crushed nuts, cherries and sweet syrups and dubbed his grand creation a “banana split sundae.”

To display his banana split sundae in all its splendor, Strickler designed long, narrow “banana boats” and had them made by Westmoreland Glass Co. in nearby Grapeville (pop. 676). Students from St. Vincent College splurged on the fancy dime dessert, which was double the price of an ordinary sundae, and even ordered it at the town’s rival drugstore.

“I watched my dad making banana splits and, boy, there was a lot of ice cream on them,” recalls William Strickler, 90, who lives in Latrobe. “We had five booths in the back of the drugstore, and boys would bring their girlfriends in and have a banana split.”

Strickler never sought credit for his creation, though he did write about it in a 1959 letter to the TV show I’ve Got a Secret. The town of Latrobe, on the other hand, isn’t shy about touting its banana split legacy and celebrated the treat’s 100th anniversary in 2004. Downtown banners feature pictures of banana splits, as does the local Elks Club pin.

“We’ve had people drive from New Jersey to here, just to get a banana split and to say they got one in Latrobe,” says Greubel, 71. The community’s banana-split history is featured on the restaurants’ placemats and wall murals.

“I met Strickler in the ’50s and he was a very friendly person,” Greubel says. “He was both a pharmacist and an optometrist, and I like to say the latter gave him a good eye for dessert.” The building that housed Tassell Pharmacy, and later Strickler’s Drug Store, still stands in downtown Latrobe, and Greubel would like to see a banana-split museum there someday.

“Strickler was a hero of mine,” he says.

A contest with a peel
While residents of Latrobe grew up hearing about Strickler’s invention, the folks in Wilmington, Ohio, recall a different tale about the origin of the banana spit, involving their own Ernest R. Hazard, owner of The Cafe.

On a blustery winter day in 1907 when business lagged, Hazard held a contest among his employees to create a new dessert. “He was always looking for ways to get the kids into the cafe,” says Stamper, adding that Wilmington College of Ohio is nearby.

Hazard entered his own recipe, which included a peeled and sliced banana heaped with three scoops of ice cream, chocolate syrup, strawberry jam, pineapple bits, chopped nuts, whipped cream and cherries. He served the concoction to his cousin Clifton Hazard.

“Clifton said, ‘What are you going to call it?'” relates Stamper. “Ernest said, ‘a banana split.'” According to town lore, Clifton scoffed at the silly name and said that it’d never sell.

Hazard not only won his own contest, but his creation continues to win fans as thousands of people attend the Banana Split Festival each June to honor him and his cool confection. The highlight of the festival, held since 1995, is a build-your-own banana split bar with a buffet of syrups and sauces.

“A banana split has fruit. It’s healthy,” says Bob Derge, 51, a volunteer applying whipped cream to each treat at the bar.

Wilmington’s most enthusiastic ambassador for the banana split is Mary Gibson, who makes 700 gallons of vanilla, chocolate and strawberry ice cream each year for the festival.

“It’s my way of doing something special for the community,” says Gibson, 57, owner of Gibson’s Goodies ice cream parlor, a town fixture since 1947. Gibson grew up five doors down from the shop and has heard-and repeated-the banana split story all her life. She isn’t ruffled by Latrobe’s claim, either.

“We didn’t know anything about their invention,” she says. “We get people here all the time who say the banana split was invented here.”