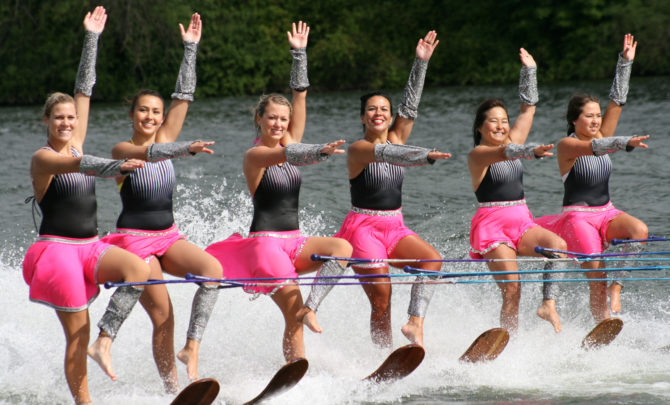 Courtesy of the Portland Water Spectacular Many community water show ski clubs have been entertaining America since the 1950s.
https://americanprofile.com/wp-content/uploads/2013/07/a-skiing-girls-150x150.jpg

And nowhere are the lakes more active than in Wisconsin, where amateur water ski clubs originated. The state is home to more clubs than any other state.

On Wisconsin’s Minocqua Lake, the Min-Aqua Bats present free shows three evenings a week. One of the nation’s first community show ski clubs, the Bats feature high school and college-age skiers and are continuing a summer tradition started more than 60 years ago in Minocqua (pop. 4,385).

“It started in 1950 with a bunch of guys and girls water skiing on the weekends,” explains Pete Abraham, 80, one of the club’s original members.

“We would hang out near the old Bats Marine and ski off of the dock,” recalls Abraham, who as a young skier was renowned for his barefoot skiing and jumps. “People used to stop on the street and watch us. We’d do some tricks and eventually drew a crowd. Two years later, we organized into an official group and put on a show every Sunday afternoon.”

“We’d walk around town wearing our white Bats jackets, and people would stop us to talk to us,” he says. “I never thought the Bats would last 60 years, but I’m glad they did.”

Family tradition
Today, many of the sport’s original acrobatic feats are still performed. “Our pyramids have grown taller, but we have stayed true to our roots,” says Katie Patterson, 21, the Min-Aqua Bats’ show director.

Two of Abraham’s granddaughters are now members of the club. Britt Abraham, 24, and her sister, Janae, 23, have been performing with the Bats since they were pre-teens.

Tucking a step stool under one arm and placing a 3-foot wooden ski saucer beneath her feet, Britt grabs a tow rope tied to a nearby idling boat as she sits on a pier at Minocqua Lake.

The engine roars and the boat rockets toward the shimmering lake, quickly pulling the rope taut. Within seconds, Britt is gliding through frothy waves toward Aqua Bowl arena, where 2,000 spectators are gathered on a warm summer evening to watch the local skiers perform. When she’s in full view of the crowd, Britt skillfully positions the stool on the saucer and climbs on top. The crowd cheers as the agile water skier, still upright, rotates the saucer 360 degrees.

Like many amateur show ski clubs, the Bats volunteer their time and talents and charge no admission. During their shows, they pass a hat to collect donations to keep the club afloat.

Even with the time commitment—members often practice nightly—many come back year after year. “We call ourselves the 50 best friends,” Janae says. “I’ll keep performing as long as I can.”

Launching a sport
Former club member Lynn Novakofski, 69, has had a front row seat to the evolution of the waterborne sport. Growing up across the street from the Aqua Bowl, he joined the Bats in 1959. In 1969, after serving in the Army, Novakofski became a professional performer at Cypress Gardens, a theme park in Winter Haven, Fla., known as the Water Ski Capital of the World.

“A lot of the acts being performed by today’s ski clubs originated in the early days,” says Novakofski, show director of Cypress Gardens from 1974 to 1991. “We worked awfully hard at training, practicing and developing new things, just like professional athletes do. We started the three-tier pyramid and then the four-tier. We also developed the 360-degree swivel and much of the free-style jumping with flips, twists and gainers.”

The stunts are a far cry from the simple origins of water skiing. Ralph Samuelson is credited with inventing the sport in 1922, when he and his older brother Ben unsuccessfully attempted to use snow skis to skim across the surface of Lake Pepin, Minn. He succeeded in gliding on water after fashioning his own skis from two pine boards and some leather straps. Samuelson also invented water ski jumping in 1925 after launching from a half-sunken diving platform slathered with lard.

The first water ski show was performed in 1928 at Steel Pier in Atlantic City, N.J. Cypress Gardens organized its first professional production in 1942 in Winter Haven. But it was on the lakes of the Midwest where the popularity of amateur show skiing exploded during the 1950s as the Tommy Bartlett Show opened in the Wisconsin Dells. Billed as the “greatest show on H2O,” it’s the longest running professional show in the nation, attracting crowds for 51 years and inspiring amateurs such as the Min-Aqua Bats.

“A group of us went to see the show in 1952 and decided we could do that, too,” Pete Abraham recalls.

Staying afloat
Interest in the sport is growing, says Novakofski, now a graphic designer for USA Water Ski, which is based in Polk City, Fla.

“The clubs are getting larger,” he says. “The biggest groups are in the Midwest. Some clubs have 40 skiers in their pyramids, and four or five boats pulling them.”

The sport’s popularity has spread to other regions. Jim Boland is show director for the Portland Water Spectacular, which was started in 1986 and is the only show ski club in Oregon.

“Show skiing is something families can do together,” says Boland, 69, who learned to water ski at age 28 and has skied in shows with his daughter and two granddaughters. “Our youngest member is 12, and our oldest, a retired postal worker, is 75.”

Spectators are loyal, too. Rita Herrmann, 46, of Harrison, Ark., was a child when she first watched the Min-Aqua Bats perform during her family’s summer visits to Minocqua Lake. “I remember the show was magical,” Herrmann recalls. “I especially loved the pyramids. The show always drew a great crowd; it seemed that the whole town turned out for it.”

Herrmann hadn’t seen the show since her grandmother died in 1987 until returning last year—specifically to see the Bats perform.

“I feared that I had built it up too much in my child’s eye, and that I might be disappointed seeing it as an adult,” she says. “I was wrong. It was just as wonderful.”

How to Experience Manhattanhenge {VIDEO}