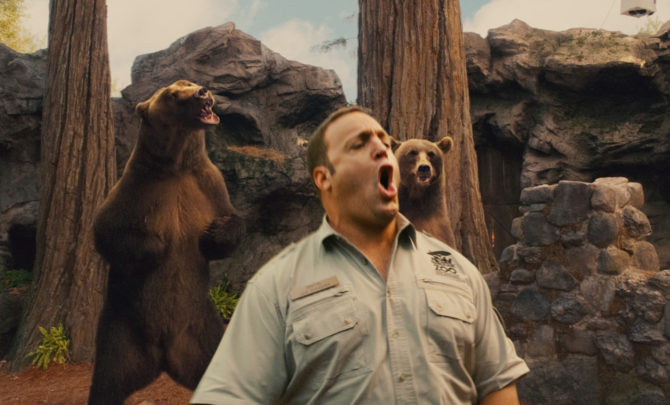 As the zookeeper of the title in this talk-to-the-animals comedy, Kevin James plays an unlucky-in-love schlub who gets tips from his best-bud beasties on how to get the girl of his dreams.

The animals are experts, after all, in the it’s-a-jungle-out-there mating game.

Some of the suggestions are better than others. Strut and roar, say the bears. Separate her from the herd, advises the lion. Throw poop at her, recommends the monkey. Mark your territory, the wolf tells him, lifting his leg to urinate on a tree.

As with monkey poo or wolf pee, this whole movie bears the signature scent of Adam Sandler, who provides the voice of the monkey and is one of the film’s 10 producers. And director Frank Coraci is certainly attuned to Sandler’s movie wavelength, having steered the comedian’s previous yukfests The Waterboy, The Wedding Singer and Click.

The movie also holds true to another recurring Sandler theme, that of “hot” girls (in this case, two of them, played by Rosario Dawson and Leslie Bibb) falling for “average” guys.

Sandler’s wife, Jackie, even makes an appearance, playing a waitress at TGI Friday’s—which should have gotten its own producer credit, given the astronomical sum they surely paid for the fawning product placement the restaurant receives.

So if you’re not an Adam Sandler fan, you probably won’t find a lot to love about Zookeeper, despite the inherent, loveable-lug likeability of its leading man. Kevin James, the former star of TV’s King of Queens, enthusiastically—and quite literally—throws himself into the role, enduring a battery of painful-looking, slapstick-y falls, smashes, thuds and thumps.

Donnie Wahlberg provides an unnecessarily dark subplot about a sadistic zoo employee, and Ken Jeong (from TV’s Community and a hoot in both Hangover movies) plays a kinky, kooky reptile specialist.

The biggest stars, however, are never seen on screen. Listen to the chatter of the animals (who interact with a mostly seamless combination of live action and computer animation) and you’ll hear some very familiar voices, including Nick Nolte (gorilla), Sylvester Stallone (lion), Cher (lioness), Don Rickles (frog) and Maya Rudolph (giraffe). Jon Favreau and Faizon Love get in some particularly clever lines as a pair of bickering bears.

Zookeeper provides a few chuckles, but little else—including any valuable animal advice. Heck, in that department, Mister Ed and his horse sense had it figured out 50 years ago.