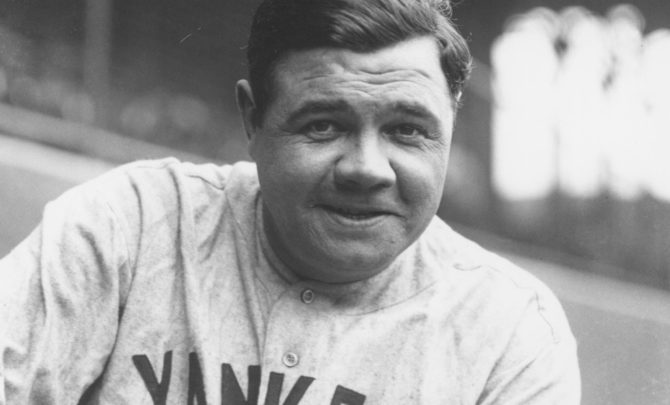 When thinking of the embodied American spirit, a range of things come to mind: blue jeans; barbecue; Uncle Sam; America's favorite pastime, baseball; and, of course, Babe Ruth. Whether you know him as Babe Ruth, The Great Bambino, The Sultan of Swat or just George Herman Ruth, Jr., the all-star world champion and hall of fame royal remains a household name and national symbol of community, competitiveness and hard work.

August 16th is the 67th anniversary of the American icon's passing, and in remembrance of the King of Crash, we've compiled a list of unusual facts about America's twentieth century golden boy. He believed he was a full year older than he actually was.

Yep, as if the 714 home runs didn't already qualify him as a superhuman, Baltimore's own Behemoth of Bust managed to add an extra year to his life (not to mention stake a longer claim on his 30s). He spent the majority of his life celebrating his birthday as February 7, 1894. It wasn't until after what he assumed was his 40th birthday in 1934, when he dug up his birth certificate to apply for a passport, that he realized his actual date of birth was February 6, 1895. Talk about extreme parenting. A resident bad-boy at only seven-years-old, Babe Ruth's habits of drinking and chewing tobacco-picked up from his time spent around his father's saloon- were swiftly kicked to the curb when his parents placed him in St. Mary's Industrial School for Orphans, Delinquent, Incorrigible and Wayward Boys in Baltimore, Maryland. Despite his rocky start, the Great Bambino managed to redeem himself while at St. Mary's by discovering his true calling. He was introduced to baseball by a group of monks.

If you thought America's pinstriped hero learned the name of the game from a string of seasoned professionals, think again. The Babe got his start under a Catholic monk named Brother Mathias, who, aided by a small collective of religious instructors at St. Mary's, introduced Ruth to what would become his-and the country's-favorite pastime. A lefty, he served as catcher in a right-handed glove.

Before he earned his title as a world-class pitcher and batter, Babe Ruth served his time behind home plate while on St. Mary's varsity baseball team. However, time with the catcher's mitt didn't come without its challenges for the Babe. With few materials available to the boys, Ruth, a famous lefty, had to make do with a right-handed mitt, which he used on his left hand to catch the ball then immediately took off so he could throw it back out. "When I had to throw to a base, trying to catch a runner, I'd toss the glove away, grab the ball with my left hand and heave it with everything I had," Ruth wrote in his autobiography. He had a pretty well-fabricated side talent.

No one can accuse the Babe of not committing to a diverse education. Pitching, batting and catching weren't the only highly developed skills he left with after graduating. He also became a very skilled-wait for it-tailor. That's right, the Colossus of Clout left St. Mary's an officially designated "qualified shirt maker." We like to imagine that he kept a supply of yarn and knitting needles under the dugout bench for spare time between innings. He was sold to the Yankees to help finance a play.

Although it's since been a somewhat disputed topic, popular baseball lore has it that in 1919, Babe Ruth, and several other Red Sox players, were sold over to the Yankees by Red Sox owner and theatrical producer and director Henry Frazee to help finance the musical No, No, Nanette. We hope for Frazee's sake it had a good run, because Boston Red Sox history has remembered the trade as the kicking off point for the infamous "Curse of Bambino," a championship dry spell that lasted from 1918 to 2004. Ruth had a revolutionary way of keeping cool during games.

The Great Bambino understood the importance of implementing green vegetables into his lifestyle-though maybe not in the conventional sense. In order to keep cool, fresh and focused during a big (and hot) game, Ruth would place a leaf of cabbage, which he left chilled over ice, on top of his head and secure it in place with his hat. To ensure maximum cooling potential, it's reported he switched out lettuce leaves every two innings-wouldn't want to be running around a baseball diamond with a head full of wilted lettuce. Seriously, why have we never thought of that? He managed to stay extra nourished when playing ball in Chicago.

A passed-down story at McCuddy's bar across from the Chicago White Sox's Comiskey Park has it that the Sultan of Swat used to run out of the park and duck into the bar when he wasn't up to bat for a quick pint and hot dog before hitting the grind again. We get you, Babe-you really don't get the full baseball experience without indulging in a ballpark snack. Was the Baby Ruth candy bar named after the Great Bambino?

Context clues, like the candy bar's 1921 advent while Ruth's career was peaking, have given birth to the popular-and highly grossing-belief that Baby Ruths were none other than the namesake of the Babe himself. However, the candy company has always said the Baby Ruth received its name inspiration from U.S. president Grover Cleveland's daughter Ruth. In any case, the marketing timing couldn't have been better. He had a lot of trouble with names.

Maybe it was the fact that he was too popular for his own good, or maybe it was just too much direct lettuce exposure, but Babe Ruth has admitted to the common problem of forgetting names instantly-including those of his teammates. His general rule of thumb? If you looked under 40, you were "kid." Over 40, it was "doc." He sometimes left the baseball diamond for the silver screen.

We can officially check "Renaissance Man" off Babe Ruth's long list of assumed titles, because the guy could literally do it all. He starred as himself in ten films-some short, some feature length-by the time his career under the field lights started winding down. He even committed to the Hollywood slim-down film diet prior to shooting The Pride of the Yankees, losing 40 pounds to realistically portray a younger version of himself. He is the only player with the last name Ruth in major league history.

You'd have to be Babe Ruth himself to uphold a name that's stood the test of time across a series of World Championships and generations.